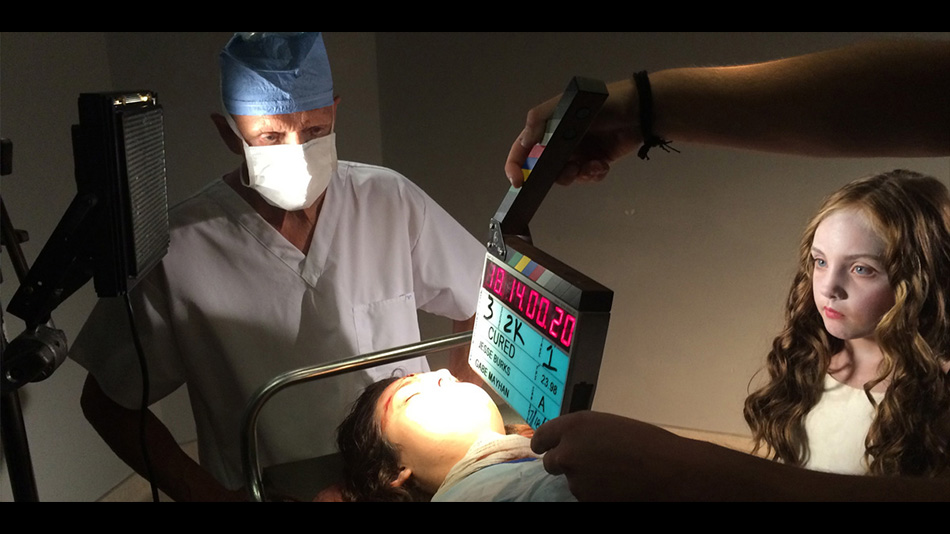 I’ve worked with Rosco LitePads a bit in the past – mainly for nighttime interior car work and other specialty set ups such as phone gags etc.

Gabe Mayhan is a cinematographer whose narrative films have been screened at the Cannes, Slamdance, and Tribeca film festivals and aired on HBO, Showtime and PBS. He was recently hired to shoot a short film called “Cured,” featuring Michael Berrymanand Sailor Holland, in Little Rock, AR.  While he was at Stageworks picking up a hazer, the Stageworks team offered to let him take out one of their brand new LitePad Vector 3-Head Location Lighting Kits so that he could try the LED LitePad Vector fixtures out on the shoot. Below is Gabe’s response to how well the fixtures performed on the film:

I’ve worked with Rosco LitePads a bit in the past – mainly for nighttime interior car work and other specialty set ups such as phone gags etc. I have to say that the new LitePad Vector units are quite an improvement over the originals. Ergonomically speaking, the baby pin casing is a huge improvement and makes rigging them very easy for the crew. The on-board dials for dimming and color temperature control on the LitePad Vector CCT are perfectly placed on the back, very easy to work with and are a huge time saver! Especially when compared to traditional methods of scrimming or coloring a lamp. Another great feature is the Accessory Slot for the Honeycomb Egg Crates that comes with the Vector 3-Head Kits.

We were working in very tight spaces and I just needed something small and controllable for a key light for one of our principals. Our gaffer Brent Bailey offered up the Vectors, because we already had a jungle of c-stands and flags cutting the light for the rest of the scene. The Vectors were perfect because of their low profile. Plus, they were cool-to-the touch, which allowed us to place them right beside our actor and control the spill with the Honeycomb Egg Crate.

The film was shot in black and white. We kept the stop consistent at 5.6, so I was a bit skeptical that the Vector would give me a reflectance of at least 8 and 1/3, that’s where I was placing this particular actor’s key value. I was totally surprised! From 4 to 5 feet away I was getting a stop over that! So we simply and quickly dialed it back a bit on the on-board dimmer and rolled!

I have to say that I’m going to be hard pressed not to have a handful of the LitePad Vectors on any film I do. Especially with a battery mount, no need for wiring or gelling. It’s fantastic if you just need one more light and only have 20 seconds to get it up and running!

“Cured” is currently in post-production with plans on starting a festival run this fall. If you’d like to see more of Gabe Mahan’s work, you can visit his website, or watch Mineral Explorers on PBS.

LitePad Vector is available in two models – Vector CCT, which offers variable color temperature control from 3000K-6000K, and Vector Daylight, which offers a fixed color temperature of 6000K and a little more brightness. LitePad Vector is also available in two kits –the 3-Head Location Lighting Kit that Gabe used on “Cured” and a 2-Head Backpack Kit for productions that need a more mobile solution.