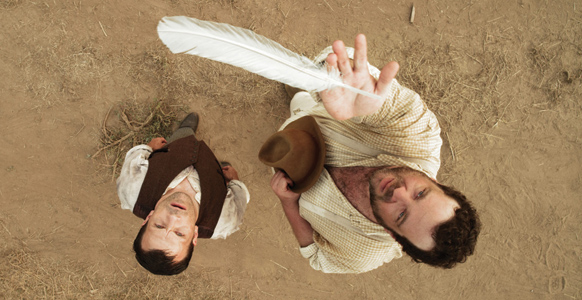 A review on the short film "Pillow"

The cackling voice of an overbearing mother (voice by Mitchell Crisp) screams from an unseen upstairs bedroom that she wants a “respectable pillow.” The local general store’s pillow bin is bare, but when a feather falls from approaching storm clouds, the two hapless brothers (Ed Lowry and John Isner) get the bright idea to go fishing for an angel while a haunting rendition of “Amazing Grace” (by Michael Sutterfield) plays from their phonograph. That is where the angel (Kristen Stracener) comes in. Umm… Yeah, Pillow definitely is a surreal fantasy.

Co-writing/co-directing/co-producing brothers Joshua H. Miller and Miles B. Miller rely solely on their adept visual styling to convey the story because, well, the brothers in the film don’t talk much—heck, they don’t talk at all. Except for the screaming mother (who is only heard and never seen), Pillow is essentially a silent film. This stunningly photographed (by Gabe Mayhan) Southern Gothic tale set somewhere in the Southern Plains during the 1930s, recalls the stylistic sensibilities of the illustrious cinematographer Roger Deakins (who is probably best known for his work with the Coen Brothers—and his nine Oscar nominations).